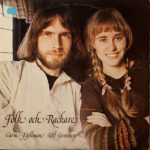 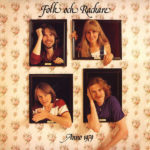 On both their albums as a duo they were accompanied by a variety of folk and jazz musicians, and in 1976, they were joined by two former members of the Norwegian band Folque, Jørn Jensen (mandolin, dulcimer, bassoon, psalterion, guitar, percussion, jew’s harp, vocals), who had played on their second album, and Trond Villa (fiddle, hardingfiddle, crumhorn, mandolin, vocals), both of whom became full-time members of the band.

Folk Och Rackare expanded their repertoire to include Norwegian ballads and tunes, and developed their distinctive music: a compelling arrangement of vocal harmonies, electric and medieval instruments, and Kjellman’s magnificent voice. In the late 70s, they played several large European folk festivals, and after Stjärnhästen, a collection of Swedish Christmas carols, the band took a four-year break.

They returned in 1985 with a new album, Rackbag, which featured guitarist Richard Thompson, and which showed the influences of both the Albion Band and its offshoot Home Service.

For many years, from the 80s and on, Gruvberg was the presenter of the roots radio show Trender Och Traditioner on Swedish Broadcasting. In 1985 Carin Kjellman released a solo album which included cover versions of songs by Sandy Denny and Richard Thompson. She has for several years led the folk music show Klingan on Swedish Broadcasting. Jensen has for many years been involved in the introduction af DAB radio in Norway, working for Norwegian Broadcasting. Villa has still been an active musician, and he is also teamleader at Music School Telemark. Both Jensen and Villa are still involved in folk music in Norway.

In the following decades, Folk och Rackare has made appearances at, for example, the Skagen Festival, Norrbostämman and the Riksscenen in Oslo.

Right now the band is preparing for several live performances during spring and summer of 2020.